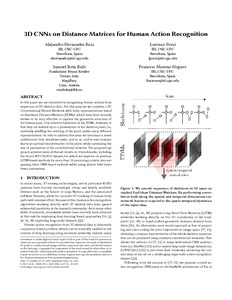 Except where otherwise noted, content on this work is licensed under a Creative Commons license : Attribution-NonCommercial-NoDerivs 3.0 Spain
Abstract
In this paper we are interested in recognizing human actions from sequences of 3D skeleton data. For this purpose we combine a 3D Convolutional Neural Network with body representations based on Euclidean Distance Matrices (EDMs), which have been recently shown to be very effective to capture the geometric structure of the human pose. One inherent limitation of the EDMs, however, is that they are defined up to a permutation of the skeleton joints, i.e., randomly shuffling the ordering of the joints yields many different representations. In oder to address this issue we introduce a novel architecture that simultaneously, and in an end-to-end manner, learns an optimal transformation of the joints, while optimizing the rest of parameters of the convolutional network. The proposed approach achieves state-of-the-art results on 3 benchmarks, including the recent NTU RGB-D dataset, for which we improve on previous LSTM-based methods by more than 10 percentage points, also surpassing other CNN-based methods while using almost 1000 times fewer parameters.
CitationHernandez, A., Porzi, L., Rota, S., Moreno-Noguer, F. 3D CNNs on distance matrices for human action recognition. A: ACM Conference on Multimedia Conference. "Proceedings of the 25th ACM Conference on Multimedia". Mountain view: 2017, p. 1087-1095.
URIhttp://hdl.handle.net/2117/114317
DOI10.1145/3123266.3123299
Publisher versionhttps://dl.acm.org/citation.cfm?doid=3123266.3123299
Collections
Share: