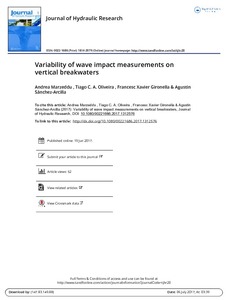 Document typeArticle
Rights accessOpen Access
Abstract
The measurement of wave-induced impacts on structures involves significant scientific and engineering challenges. Regular nearly breaking pgbgand broken waves generated following cnoidal and first-order Stokes wavemaker theory have been considered to study the variability of wave impacts on vertical breakwaters. Four small-scale hydraulic experiments were carried out and repeated 120 times using high-speed pressure and force measurement equipment. High variability in the measured pressure field and total force were observed, reflecting the random nature of the studied phenomena. The force variability was similar for the nearly breaking and broken waves. The maximum measured force was between 166 and 177% of the minimum measured force. In relation to the force distribution and maximum pressure points, the observed variability is higher for broken waves. To deal with such variability in the observations, suitable probability distributions for forces (GEV) and pressures (Gamma) are proposed.
Description
This is an Accepted Manuscript of an article published by Taylor & Francis Group in Journal of Hydraulic Research on 2017, available online at: http://www.tandfonline.com/10.1080/00221686.2017.1312576
CitationMarzeddu, A., Oliveira, T.C.A, Gironella, X., Sanchez-Arcilla, A. Variability of wave impact measurements on vertical breakwaters. "Journal of hydraulic research", Novembre 2017, vol. 55, núm. 6, p. 772-786.
URIhttp://hdl.handle.net/2117/114309
DOI10.1080/00221686.2017.1312576
ISSN0022-1686
Publisher versionhttp://www.tandfonline.com/doi/abs/10.1080/00221686.2017.1312576
Collections
Share: