Control of a robotic arm using an Omega 2+ module 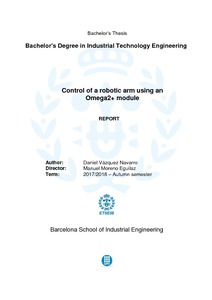 The aim of this project has been to introduce the Omega2 [1] module in the Department of Electronic Engineering (EEL) at ETSEIB. This project can beneficial for further students who want to use the module as this report can be used as an Omega user guide. Moreover, the module has been introduced in a real project by replacing the current control module by the Omega board. The module has been successfully adapted to a current robot. Some adaptation has been needed like developing a library to fit perfectly the module with the other components. Furthermore, a web-based API has been developed to allow the user to control the robot. By using it, the user can control the robot in an easy and intuitive way. This interface allows to control each servomotor in independently and to make horizontal and vertical movements, which are the combination of two servomotors. In addition, the user can press a button that will run a pre-loaded automatic movement that will show the robot arm potential. The result is a fully functional low-scale robot that can be controlled by everybody. Due to this tiny size, it can be conceived as toy but it could be easily, in a bigger scale, an industrial robot that could perfectly be in a factory helping people to achieve their work.
SubjectsManipulators (Mecanism), Robotics, Manipuladors (Mecanismes), Robòtica
URIhttp://hdl.handle.net/2117/114242