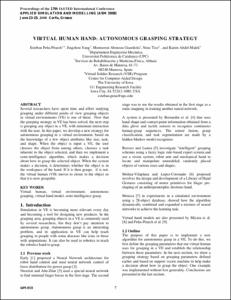 Yang, Jingzhou
Abenoza Guardiola, Montserrat
Ticó Falguera, Neus
Abdel-Malek, Karim
Document typeConference report
PublisherFelice, F. de
Rights accessOpen Access
Abstract
Several researchers have spent time and effort studying grasping under different points of view grasping objects in virtual environments (VE) is one of them. Now that the grasping strategy in VE has been solved, the next step is grasping any object in a VE, with minimum interaction with the user. In this paper, we develop a new strategy for autonomous grasping in a virtual environment, based on the knowledge of a few object attributes like size, task, and shape. When the object is input a VE, the user chooses the object from among others, chooses a task inherent to the object selected, and then we implement a semi-intelligence algorithm, which makes a decision about how to grasp the selected object. When the system makes a decision, it determines whether the object is in the workspace of the hand. If it is then grasps, if is not, the virtual human (VH) moves to closer to the object so that it is now graspable.
CitationPeña, E. [et al.]. Virtual human hand: autonomous grasping strategy. A: IASTED International Conference on Applied Simulation and Modelling. "17th IASTED International Conference on Applied Simulation and Modelling". Corfu: Felice, F. de, 2008, p. 609-618.
URIhttp://hdl.handle.net/2117/11423
ISBN978-0-88986-731-4
Collections
Share: