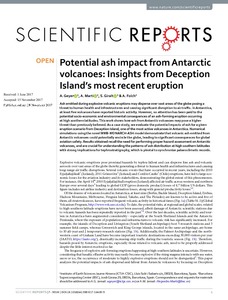 Except where otherwise noted, content on this work is licensed under a Creative Commons license : Attribution-NonCommercial-NoDerivs 4.0 Spain
ProjectVOLCANES Y CLIMA: REEVALUACION DE SU INTERACCION A CORTO Y LARGO PLAZO (MINECO-CGL2015-72629-EXP)
Abstract
Ash emitted during explosive volcanic eruptions may disperse over vast areas of the globe posing a threat to human health and infrastructures and causing significant disruption to air traffic. In Antarctica, at least five volcanoes have reported historic activity. However, no attention has been paid to the potential socio-economic and environmental consequences of an ash-forming eruption occurring at high southern latitudes. This work shows how ash from Antarctic volcanoes may pose a higher threat than previously believed. As a case study, we evaluate the potential impacts of ash for a given eruption scenario from Deception Island, one of the most active volcanoes in Antarctica. Numerical simulations using the novel MMB-MONARCH-ASH model demonstrate that volcanic ash emitted from Antarctic volcanoes could potentially encircle the globe, leading to significant consequences for global aviation safety. Results obtained recall the need for performing proper hazard assessment on Antarctic volcanoes, and are crucial for understanding the patterns of ash distribution at high southern latitudes with strong implications for tephrostratigraphy, which is pivotal to synchronize palaeoclimatic records.
CitationGeyer, A. [et al.]. Potential ash impact from Antarctic volcanoes: Insights from Deception Island’s most recent eruption. "Scientific Reports", 28 Novembre 2017, vol. 7.
URIhttp://hdl.handle.net/2117/114152
ISSN2045-2322
Publisher versionhttps://www.nature.com/articles/s41598-017-16630-9
Collections
Share: