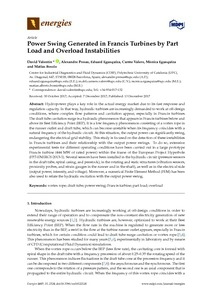 Document typeArticle
Rights accessOpen Access
European Commission's projectHYPERBOLE - HYdropower plants PERformance and flexiBle Operation towards Lean integration of new renewable Energies (EC-FP7-608532)
Abstract
Hydropower plays a key role in the actual energy market due to its fast response and regulation capacity. In that way, hydraulic turbines are increasingly demanded to work at off-design conditions, where complex flow patterns and cavitation appear, especially in Francis turbines. The draft tube cavitation surge is a hydraulic phenomenon that appears in Francis turbines below and above its Best Efficiency Point (BEP). It is a low frequency phenomenon consisting of a vortex rope in the runner outlet and draft tube, which can become unstable when its frequency coincides with a natural frequency of the hydraulic circuit. At this situation, the output power can significantly swing, endangering the electrical grid stability. This study is focused on the detection of these instabilities in Francis turbines and their relationship with the output power swings. To do so, extensive experimental tests for different operating conditions have been carried out in a large prototype Francis turbine (444 MW of rated power) within the frame of the European Project Hyperbole (FP7-ENERGY-2013-1). Several sensors have been installed in the hydraulic circuit (pressure sensors in the draft tube, spiral casing, and penstock), in the rotating and static structures (vibration sensors, proximity probes, and strain gauges in the runner and in the shaft), as well as in the electrical side (output power, intensity, and voltage). Moreover, a numerical Finite Element Method (FEM) has been also used to relate the hydraulic excitation with the output power swing.
CitationValentin, D., Presas, A., Egusquiza, E., Valero, M., Egusquiza, M., Bossio, M. Power swing generated in Francis turbines by part load and overload instabilities. "Energies", 13 Desembre 2017, vol. 10, núm. 12.
URIhttp://hdl.handle.net/2117/114103
DOI10.3390/en10122124
ISSN1996-1073
Publisher versionhttp://www.mdpi.com/1996-1073/10/12/2124
Collections
Share: