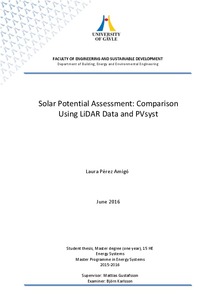 Energy consumption is on a permanent rise and it is becoming increasingly concentrated in cities. Hence, cities have to work on saving energy and being more efficient by finding sources with great potential to produce their own energy and implanting the correct policies. Photovoltaics is the renewable energy technology with the higher potential in the urban context and Sweden is highly committed on its investment since it is the less developed renewable source in the country. The aim of the thesis is to compare two methodologies and determine which one is better or gives more relevant information for this kind of studies in order to evaluate how good a solar map is. For doing this, the first step is to create a solar map to have a general idea about the solar potential and to know which roofs are more suitable to install PV systems. This is made with LiDAR data using ArcGIS and SEES software. After that, another study on the quantity of solar power that could be obtained from those roofs will be performed using PVsyst, where it is possible to develop an entire PV system installation and obtain more exhaust results on energy production and shadowing. Four buildings are going to be evaluated, two public ones located in Gävle city centre (Library and Concert House) and two residential ones located in Sätra. Factors such as the optimal tilt, the best azimuth angle and the distance between panel rows are dimensioned in order to reduce shading loss and improve the performance ratio of the system in PVsyst. The final system is defined with 10° tilt, south orientation (0° azimuth), 1.5meters distance between rows and modules in strings of 9 panels connected in series for the four buildings. The simulated production from the best alternative is compared with the solar map results. Since the solar map contains information about total yearly irradiation, the energy production is obtained by means of visual exploration of the results combined with simple calculations that include GCR and system efficiency. The results show that a solar map is a reliable tool to obtain a general estimation of the solar potential in buildings but it is necessary to first identify its limitations and be able to filter the results. On the other hand, PVsyst software allows making several simulations and eases to obtain a PV system in a building or structure with detailed results of the system components. It can be concluded that since the PVsyst only allows to work with specific buildings or structures, a solar map permits big amounts of data calculations. It can be said that a solar map takes part in the process of obtaining a pre-project and the PVsyst is used in the project when a real installation is sized. Nevertheless, both methods are found to be reliable and suitable for solar potential assessment works since the results obtained match.
SubjectsPhotovoltaic power generation, Optical radar, Solar radiation, Energia solar fotovoltaica, Radar òptic, Radiació solar
URIhttp://hdl.handle.net/2117/114093