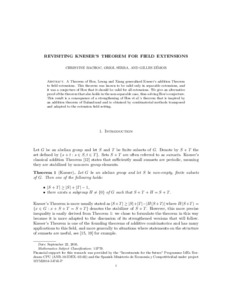 A Theorem of Hou, Leung and Xiang generalised Kneser’s addition Theorem to field extensions. This theorem was known to be valid only in separable extensions, and it was a conjecture of Hou that it should be valid for all extensions. We give an alternative proof of the theorem that also holds in the non-separable case, thus solving Hou’s conjecture. This result is a consequence of a strengthening of Hou et al.’s theorem that is inspired by an addition theorem of Balandraud and is obtained by combinatorial methods transposed and adapted to the extension field setting.
CitationBachoc, C., Serra, O., Zemor, G. Revisiting Kneser’s theorem for field extensions. "Combinatorica", 31 Maig 2017.
URIhttp://hdl.handle.net/2117/114080
DOI10.1007/s00493-016-3529-0
ISSN0209-9683
Publisher versionhttps://link.springer.com/article/10.1007%2Fs00493-016-3529-0