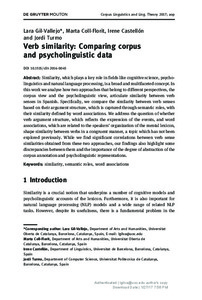 Document typeArticle
Rights accessOpen Access
Abstract
Similarity, which plays a key role in fields like cognitive science, psycho- linguistics and natural language processing, is a broad and multifaceted concept. In this work we analyse how two approaches that belong to different perspectives, the corpus view and the psycholinguistic view, articulate similarity between verb senses in Spanish. Specifically, we compare the similarity between verb senses based on their argument structure, which is captured through semantic roles, with their similarity defined by word associations. We address the question of whether verb argument structure, which reflects the expression of the events, and word associations, which are related to the speakers’ organization of the mental lexicon, shape similarity between verbs in a congruent manner, a topic which has not been explored previously. While we find significant correlations between verb sense similarities obtained from these two approaches, our findings also highlight some discrepancies between them and the importance of the degree of abstraction of the corpus annotation and psycholinguistic representations.
CitationGil-Vallejo, L., Coll-Florit, M., Castellón, I., Turmo, J. Verb similarity: Comparing corpus and psycholinguistic data. "Corpus linguistics and linguistic theory", Octubre 2018, vol. 14, núm. 2, p. 275-307.
URIhttp://hdl.handle.net/2117/114071
DOI10.1515/cllt-2016-0045
ISSN1613-7027
Publisher versionhttps://www.degruyter.com/view/j/cllt.ahead-of-print/cllt-2016-0045/cllt-2016-0045.xml
Collections
Share: