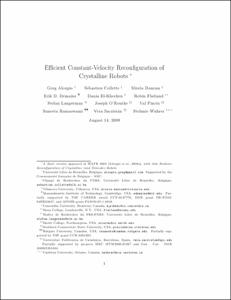 Ramaswami, Suneeta
Pinciu, Val
Aloupis, G.
Collette, S.
Damian, M.
Demaine, E. D.
El-Khechen, Dania
Flatland, R.
Langerman, S.
O'Rourke, J.
Document typeArticle
Rights accessOpen Access
Abstract
In this paper we propose novel algorithms for reconfiguring modular robots that are composed of n atoms. Each atom has the shape of a unit cube and can expand/contract each face by half a unit, as well as attach to or detach from faces of neighboring atoms. For universal reconfiguration, atoms must be arranged in 2x2x2 modules. We respect certain physical constraints: each atom reaches at most constant velocity and can displace at most a constant number of other atoms. We assume that one of the atoms has access to the coordinates of atoms in the target configuration. Our algorithms involve a total of O(n2) atom operations, which are performed in O(n) parallel steps. This improves on previous recon guration algorithms, which either use O(n2) parallel steps [Rus and Vona, 2001, Vassilvitskii et al., 2002, Butler and Rus, 2003] or do not respect the constraints men- tioned above [Aloupis et al., 2009b]. In fact, in the setting considered, our algorithms are optimal. A further advantage of our algorithms is that reconfiguration can take place within the union of the source and target configuration space, and only requires local communication.
CitationAloupis, G. [et al.]. Efficient constant-velocity reconfiguration of crystalline robots. "Roboti", 2011, vol. 29, núm. 1, p. 59-71.
URIhttp://hdl.handle.net/2117/11403
DOI10.1017/S026357471000072X
ISSN0263-5747
Publisher versionhttp://journals.cambridge.org/repo_A79bxW5d
Collections
Share: