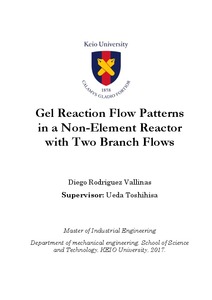 estudiant.upc.edu
Tutor / director / evaluatorToshihisa, Ueda
Document typeMaster thesis
Rights accessOpen Access
Abstract
In the framework of chemical and energy engineering fluids have been the subject of many studies for a lot years. In some cases, these fluids upon contact form gels. These gels have many applications like medical, food, cleaning... The peculiarity of these materials that share both properties of solids and liquids are yet to be described. In this study, a qualitative and quantitative analysis of the mass transfer is carried out when in a reactor without internal element 10 mass% PVA (polyvinyl alcohol) and 3 mass% Borax are introduced. The PVA solution was supplied to the main flow pipe at a constant inlet pressure of 20 kPa. The Borax solution was red dyed to visualize in a better way the flow pattern and it is introduced at a constant velocity of 30 mm/s during 16 seconds in a perpendicular direction to the nonelement mixer. It has been previously studied that these compounds upon interaction form a gel. This gel, for its future industrialized production must be divided into independent capsules and for this PVA is introduced again by a new branch to the reactor in order to divide into two parts the formed gel pill. The second injection of PVA was dyed blue and parameters of velocity and chemical composition were varied in order to know which are the boundary conditions for the splitting phenomena. The analysis of the transfer of matter is carried out by a code (also developed in the present work) of Matlab of recognition of intensity of colors in images. The experiments have been recorded. For the quantitative analysis, a pressure sensor has been placed along the reactor which provides data along the reactor.
SubjectsFluid mechanics, Chemical reactions, Vinyl polymers, Mecànica de fluids, Reaccions químiques, Polímers vinílics
URIhttp://hdl.handle.net/2117/113984
Collections
Share: