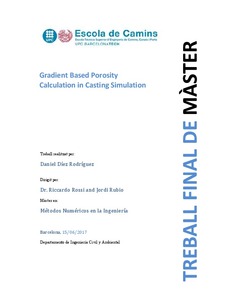 Except where otherwise noted, content on this work is licensed under a Creative Commons license : Attribution 3.0 Spain
Abstract
Porosity is one of the most common defects in casting production. When some parts of the casting begin to solidify they contract due to the difference of densities between the liquid and solid phases. The areas that are still liquid feed the solidifying regions until at some point feeding is not longer possible due to the growth of the solid phase and porosity begins to form. If the feeding cut is due to the growth of dendrites, pores will have a very small size and will be usually mentioned as microporosity. When a pool of liquid is isolated, surrounded by solid material, a big void will appear known as macroporosity. If the liquid pool is connected to the exterior it will form pipe shrinkage. The aim of this work is the implementation of a microporosity model inside the commercial casting software Click2Cast, based on the general finite elements framework Kratos Multiphysics. The model that has been implemented is based on the Dimensionless Niyama method developed by Carlson and Beckermann in 2008. This approach requires the recover of the gradient of the temperature. In order to do this, several methods to compute the gradients were developed and implemented inside the code. Finally, another model to calculate macroporosity and pipe shrinkage is being currently implemented. This method is based on the calculation of the pressure during the solidification. No results are provided for this model as still further work is needed to expect a correct under different circumstaces .The objective is that after validation, this model will be also included in Click2Cast.
SubjectsPorosity, Materials -- Testing, Porositat, Assaigs de materials
DegreeMÀSTER UNIVERSITARI EN MÈTODES NUMÈRICS EN ENGINYERIA (Pla 2012)
URIhttp://hdl.handle.net/2117/113965
Collections
Share: