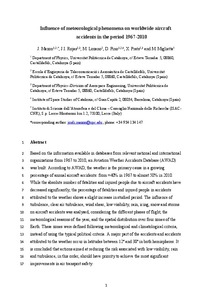 Miglietta, M.M.
Document typeArticle
Rights accessOpen Access
Abstract
Based on the information available in databases from relevant national and international organizations from 1967 to 2010, an Aviation Weather Accidents Database (AWAD) was built. According to the AWAD, the weather is the primary cause in a growing percentage of annual aircraft accidents: from about 40% in 1967 to almost 50% in 2010. While the absolute number of fatalities and injured people due to aircraft accidents has decreased significantly, the percentage of fatalities and injured people in accidents attributed to the weather shows a slight increase in the studied period. The influence of turbulence, clear air turbulence, wind shear, low visibility, rain, icing, snow and storms on aircraft accidents was analysed, considering the different phases of flight, the meteorological seasons of the year and the spatial distribution over four zones of the Earth. These zones were defined following meteorological and climatological criteria, instead of using the typical political criteria. A major part of the accidents and accidents attributed to the weather occur in latitudes between 12º and 38º in both hemispheres. It is concluded that actions aimed at reducing the risk associated with low visibility, rain and turbulence, in this order, should have priority to achieve the most significant improvements in air transport safety.
Description
This is the pre-peer reviewed version of the following article: Mazon, J., Rojas, J. I., Lozano, M., Pino, D., Prats, X. and Miglietta, M. M. (2017), Influence of meteorological phenomena on worldwide aircraft accidents, 1967–2010. Met. Apps. doi:10.1002/met.1686, which has been published in final form at http://onlinelibrary.wiley.com/doi/10.1002/met.1686/abstract. This article may be used for non-commercial purposes in accordance with Wiley Terms and Conditions for Self-Archiving.
CitationMazon, J., Rojas, J.I., Lozano, M., Pino, D., Prats, X., Miglietta, M. Influence of meteorological phenomena on worldwide aircraft accidents in the period 1967-2010. "Meteorological applications", 1 Desembre 2017, vol. 24, núm. 5, p. 1-10.
URIhttp://hdl.handle.net/2117/113950
DOI10.1002/met.1686
ISSN1350-4827
Collections
Share: