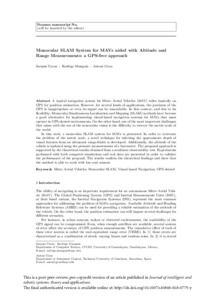 Document typeArticle
Rights accessOpen Access
All rights reserved. This work is protected by the corresponding intellectual and industrial property rights. Without prejudice to any existing legal exemptions, reproduction, distribution, public communication or transformation of this work are prohibited without permission of the copyright holder
Abstract
A typical navigation system for a Micro Aerial Vehicle (MAV) relies basically on GPS for position estimation. However,for several kinds of applications, the precision of the GPS is inappropriate or even its signal can be unavailable. In this context, and due to its flexibility, Monocular Simultaneous Localization and Mapping (SLAM) methods have become a good alternative for implementing visual-based navigation systems for MAVs that must operate in GPS-denied environments. On the other hand, one of the most important challenges that arises with the use of the monocular vision is the difficulty to recover the metric scale of the world. In this work, a monocular SLAM system for MAVs is presented. In order to overcome the problem of the metric scale, a novel technique for inferring the approximate depth of visual features from an ultrasonic range-finder is developed. Additionally, the altitude of the vehicle is updated using the pressure measurements of a barometer. The proposed approach is supported by the theoretical results obtained from a nonlinear observability test. Experiments performed with both computer simulations and real data are presented in order to validate the performance of the proposal. The results confirm the theoretical findings and show that the method is able to work with low-cost sensors.
CitationUrzua, S., Munguía, R.F., Grau, A. Monocular SLAM system for MAVs aided with altitude and range measurements: a GPS-free approach. "Journal of intelligent and robotic systems: theory and applications (Online)", vol. 94, núm. 1, Abril 2019, p. 203-217.
URIhttp://hdl.handle.net/2117/113944
DOI10.1007/s10846-018-0775-y
ISSN1573-0409
Publisher versionhttps://link.springer.com/article/10.1007/s10846-018-0775-y
Collections
Share: