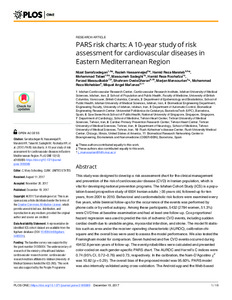 Mohebian, Mohammad Reza
Mansourian, Marjan
Document typeArticle
Rights accessOpen Access
European Commission's projectTECNIOSPRING - ACC10 programme to foster mobility of researchers with a focus in applied research and technology transfer (EC-FP7-600388)
Abstract
This study was designed to develop a risk assessment chart for the clinical management and prevention of the risk of cardiovascular disease (CVD) in Iranian population, which is vital for developing national prevention programs. The Isfahan Cohort Study (ICS) is a popu- lation-based prospective study of 6504 Iranian adults 35 years old, followed-up for ten years, from 2001 to 2010. Behavioral and cardiometabolic risk factors were examined every five years, while biennial follow-ups for the occurrence of the events was performed by phone calls or by verbal autopsy. Among these participants, 5432 (2784 women, 51.3%) were CVD free at baseline examination and had at least one follow-up. Cox proportional hazard regression was used to predict the risk of ischemic CVD events, including sudden cardiac death due to unstable angina, myocardial infarction, and stroke. The model fit statis- tics such as area under the receiver-operating characteristic (AUROC), calibration chi- square and the overall bias were used to assess the model performance. We also tested the Framingham model for comparison. Seven hundred and five CVD events occurred during 49452.8 person-years of follow-up. The event probabilities were calculated and presented color-coded on each gender-specific PARS chart. The AUROC and Harrell’s C indices were 0.74 (95% CI, 0.72–0.76) and 0.73, respectively. In the calibration, the Nam-D’Ago stino ¿ 2 was 10.82 (p = 0.29). The overall bias of the proposed model was 95.60%. PARS model was also internally validated using cross-validation. The Android app and the Web-based risk assessment tool were also developed as to have an impact on public health. In compari- son, the refitted and recalibrated Framingham models, estimated the CVD incidence with the overall bias of 149.60% and 128.23% for men, and 222.70% and 176.07% for women, respectively. In conclusion, the PARS risk assessment chart is a simple, accurate, and well- calibrated tool for predicting a 10-year risk of CVD occurrence in Iranian population and can be used in an attempt to develop national guidelines for the CVD management .
CitationSarrafzadegan, N., Hassannejad, R., Marateb, H.R., Talaei, M., Sadeghi , M., Roohafza, H., Masoudkabir, F., OveisGharan, S., Mañanas, M.A., Mohebian, M., Mansourian, M. PARS risk charts: A 10-year study of risk assessment for cardiovascular diseases in Eastern Mediterranean Region. "PLoS one", 19 Desembre 2017, vol. 12, núm. 12, p. 1-19.
URIhttp://hdl.handle.net/2117/113831
DOI10.1371/journal.pone.0189389
ISSN1932-6203
Publisher versionhttp://journals.plos.org/plosone/article?id=10.1371/journal.pone.0189389
Collections
Share: