An algebraic framework for Diffie-Hellman assumptions 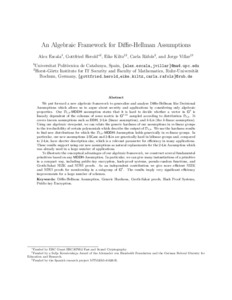 Document typeArticle
Rights accessOpen Access
All rights reserved. This work is protected by the corresponding intellectual and industrial property rights. Without prejudice to any existing legal exemptions, reproduction, distribution, public communication or transformation of this work are prohibited without permission of the copyright holder
Abstract
We put forward a new algebraic framework to generalize and analyze Di e-Hellman like Decisional Assumptions which allows us to argue about security and applications by considering only algebraic properties. Our D`;k-MDDH assumption states that it is hard to decide whether a vector in G` is linearly dependent of the columns of some matrix in G` k sampled according to distribution D`;k. It covers known assumptions such as DDH, 2-Lin (linear assumption), and k-Lin (the k-linear assumption). Using our algebraic viewpoint, we can relate the generic hardness of our assumptions in m-linear groups to the irreducibility of certain polynomials which describe the output of D`;k. We use the hardness results to nd new distributions for which the D`;k-MDDH-Assumption holds generically in m-linear groups. In particular, our new assumptions 2-SCasc and 2-ILin are generically hard in bilinear groups and, compared to 2-Lin, have shorter description size, which is a relevant parameter for e ciency in many applications. These results support using our new assumptions as natural replacements for the 2-Lin Assumption which was already used in a large number of applications. To illustrate the conceptual advantages of our algebraic framework, we construct several fundamental primitives based on any MDDH-Assumption. In particular, we can give many instantiations of a primitive in a compact way, including public-key encryption, hash-proof systems, pseudo-random functions, and Groth-Sahai NIZK and NIWI proofs. As an independent contribution we give more e cient NIZK and NIWI proofs for membership in a subgroup of G`. The results imply very signi cant e ciency improvements for a large number of schemes.
Description
The final publication is available at Springer via http://dx.doi.org/10.1007/s00145-015-9220-6
CitationEscala, A., Herold, G., Kiltz, E., Rafols, C., Villar, J. An algebraic framework for Diffie-Hellman assumptions. "Journal of cryptology", Gener 2017, vol. 30, núm. 1, p. 242-288.
URIhttp://hdl.handle.net/2117/113812
DOI10.1007/s00145-015-9220-6
ISSN0933-2790
Publisher versionhttp://link.springer.com/article/10.1007/s00145-015-9220-6
Collections
Share: