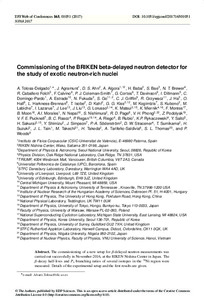 Commissioning of the BRIKEN beta-delayed neutron detector for the study of exotic neutron-rich nuclei (134,9Kb)
Share:

Beta-delayed neutron emission (Beta-n) is a form of radioactive decay in which an electron, an anti-neutrino and one or more neutrons are emitted. This process arises if the energy window of the decay Q_Beta is greater than the neutron separation energy S n of the daughter. The probability in each decay of emitting neutrons is called the Pn value. This form of decay plays a key role in the synthesis of chemical elements in the Universe via the rapid neutron capture process, or r-process. The r-process proceeds far from the valley of nuclear stability, and leads to very neutron-rich nuclei that then decay to the line of stability. Most of these nuclei are ßn emitters. The initial abundance distribution is shaped by the decay half-life T1/2, but the neutron emission affects the final abundances in two ways: on the one hand it shifts the decay path to lower masses and on the other hand it provides a source of neutrons for late captures that will shift it in the opposite way. Thus, a good knowledge of Pn and T1/2 values of the nuclei between the line of stability and the r-process path is needed for a correct understanding of the observed abundances. Besides the astrophysical interest, the measurement of new Pn values and half-lives is also useful for refining nuclear structure models, constraining parameters of the models and testing ß-strength functions [3]. Our current understanding of the process of ß-delayed multiple neutron emission, as well as the competition between different open channels (gamma, one-neutron, two-neutron, etc), is incomplete because of the scarcity of experimental data. With these ideas in mind, the BRIKEN (Beta-delayed-neutron-measurements at RIKEN) collaboration was established, with the aim of greatly improving the quantity and quality of data the decays of very neutron-rich nuclei close to the r-process path.
CitationTolosa-Delgado, A., Agramunt, J., Calviño, F., Cortes, G., Tarifeño, A. Commissioning of the BRIKEN beta-delayed neutron detector for the study of exotic neutron-rich nuclei. A: Nuclear Physics in Astrophysics. "EPJ Web Conf., volume 165, 2017. Nuclear Physics in Astrophysics VIII (NPA8 2017)". Catania: EDP Sciences, 2018, p. 01051-1-01051-4.
URIhttp://hdl.handle.net/2117/113769
DOI10.1051/epjconf/201716501051
ISBN978-2-7598-9030-9
Publisher versionhttps://www.epj-conferences.org/articles/epjconf/abs/2017/34/epjconf_npa82017_01051/epjconf_npa82017_01051.html