Super-AGB stars and their role as electron capture supernova progenitors 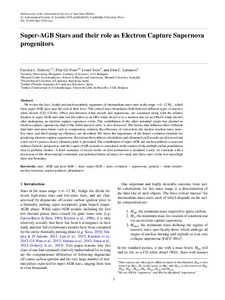 Siess, Lionel
Lattanzio, John C.
Document typeArticle
Rights accessOpen Access
Abstract
We review the lives, deaths and nucleosynthetic signatures of intermediate-mass stars in the range ˜6–12 M¿, which form super-AGB stars near the end of their lives. The critical mass boundaries both between different types of massive white dwarfs (CO, CO–Ne, ONe), and between white dwarfs and supernovae, are examined along with the relative fraction of super-AGB stars that end life either as an ONe white dwarf or as a neutron star (or an ONeFe white dwarf), after undergoing an electron capture supernova event. The contribution of the other potential single-star channel to electron-capture supernovae, that of the failed massive stars, is also discussed. The factors that influence these different final fates and mass limits, such as composition, rotation, the efficiency of convection, the nuclear reaction rates, mass-loss rates, and third dredge-up efficiency, are described. We stress the importance of the binary evolution channels for producing electron-capture supernovae. Recent nucleosynthesis calculations and elemental yield results are discussed and a new set of s-process heavy element yields is presented. The contribution of super-AGB star nucleosynthesis is assessed within a Galactic perspective, and the (super-)AGB scenario is considered in the context of the multiple stellar populations seen in globular clusters. A brief summary of recent works on dust production is included. Last, we conclude with a discussion of the observational constraints and potential future advances for study into these stars on the low mass/high mass star boundary.
CitationDoherty, C., Gil Pons, P., Siess, L., Lattanzio, J. C. Super-AGB stars and their role as electron capture supernova progenitors. "Publications of the Astronomical Society of Australia", 23 Novembre 2017, vol. 34, p. 1-28.
URIhttp://hdl.handle.net/2117/113761
DOI10.1017/pasa.2017.52
ISSN1323-3580
Collections
Share: