Collapse of the Pilcomayo River 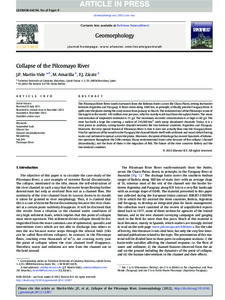 Amarilla, Mabel
Zárate, Fernando José
Document typeArticle
Rights accessOpen Access
Abstract
The Pilcomayo River flows south-eastwards from the Bolivian Andes across the Chaco Plains, setting the border between Argentina and Paraguay. It flows down along 1000km, in principle, to finally join the Paraguay River. It spills over the plains during the rainy season from January to March. The sediment load of the Pilcomayo is one of the largest in the world: 140milliontons per year, which is mostly wash load from the upland Andes. The mean concentration of suspended sediment is 15g/l. The maximum recorded concentration is as high as 60g/l. The river has built a large fan covering a surface of 210,000km2, with many abandoned channels. Today, it is a river prone to avulsion, raising border disputes between the two lowland countries, Argentina and Paraguay. Moreover, the very special feature of Pilcomayo River is that it does not actually flow into the Paraguay River. Very far upstream of the mouth in the Paraguay the channel blocks itself with sediment and wood debris forcing water and sediment to spread across the plains. Moreover, the point of blockage has moved hundreds of kilometers upstream throughout the 20th century. Many environmental issues arise because of this collapse (channel discontinuity), not the least of them is the migration of fish. The future of the river concerns Bolivia and the two lowland countries. © 2012 Elsevier B.V.
CitationMartín-Vide, J.P., Amarilla, M., Zárate, F. Collapse of the Pilcomayo River. "Geomorphology", Gener 2014, vol. 205, p. 155-163.
URIhttp://hdl.handle.net/2117/113665
DOI10.1016/j.geomorph.2012.12.007
ISSN0169-555X
Publisher versionhttp://www.sciencedirect.com/science/article/pii/S0169555X12005569
Collections
Share: