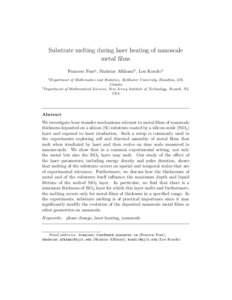 Document typeArticle
Rights accessOpen Access
Abstract
We investigate heat transfer mechanisms relevant to metal films of nanoscale thickness deposited on a silicon (Si) substrate coated by a silicon oxide (SiO2) layer and exposed to laser irradiation. Such a setup is commonly used in the experiments exploring self and directed assembly of metal films that melt when irradiated by laser and then evolve on time scale measured in nanoseconds. We show that in a common experimental setting, not only the metal but also the SiO2 layer may melt. Our study of the effect of the laser parameters, including energy density and pulse duration, shows that melting of the substrate occurs on spatial and temporal scales that are of experimental relevance. Furthermore, we discuss how the thicknesses of metal and of the substrate itself influence the maximum depth and liquid lifetime of the melted SiO2 layer. In particular, we find that there is a minimum thickness of SiO2 layer for whichthis layer melts and furthermore, the melting occurs only for metal films of thickness in a specified range. In the experiments, substrate melting is of practical importance since it may significantly modify the evo-lution of the deposited nanoscale metal films or other geometries on nanoscale.
CitationFont, F. Substrate melting during laser heating of nanoscale metal films. "International journal of heat and mass transfer", 1 Octubre 2017, vol. 113, p. 237-245.
URIhttp://hdl.handle.net/2117/113661
DOI10.1016/j.ijheatmasstransfer.2017.05.072
ISSN0017-9310
Collections
Share: