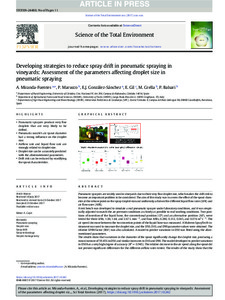 Except where otherwise noted, content on this work is licensed under a Creative Commons license : Attribution-NonCommercial-NoDerivs 3.0 Spain
ProjectHERRAMIENTAS DE BASE FOTONICA PARA LA GESTION AGRONOMICA Y EL USO DE PRODUCTOS FITOSANITARIOS SOSTENIBLE EN CULTIVOS ARBOREOS EN EL MARCO DE LA AGRICULTURA DE PRECISION (MINECO-AGL2013-48297-C2-1-R)
Abstract
Pneumatic sprayers are widely used in vineyards due to their very fine droplet size, which makes the drift risk to become an important problem to be considered. The aim of this study was to assess the effect of the spout diameter at the release point on the spray droplet size and uniformity achieved for different liquid flow rates (LFR) and air flow rates (AFR).A test bench was developed to simulate a real pneumatic sprayer under laboratory conditions, and it was empirically adjusted to match the air pressure conditions as closely as possible to real working conditions. Two positions of insertion of the liquid hose, the conventional position (CP) and an alternative position (AP), were tested for three LFRs, 1.00, 1.64, and 2.67Lmin-1, and four AFRs, 0.280, 0.312, 0.345, and 0.376m3 s-1. The air speed decrease between the two insertion points of the liquid hose was measured. A Malvern SprayTec® instrument was used to measure the droplet size, and the D50, D10, and D90 parameter values were obtained. The relative SPAN factor (RSF) was also calculated. A model to predict variations in D50 was fitted using the aforementioned parameters.The results show that variations in the diameter of the spout significantly change the droplet size, producing a mean increase of 59.45% in D50 and similar increases in D10 and D90. The model developed to predict variations in D50 has a very high degree of accuracy (R2 =0.945). The relative decrease in the air speed along the spout did not present significant differences for the different airflow rates tested. The results of the study show that the droplet size produced in pneumatic spraying can be modified easily by varying the air spout dimensions. This should be taken into account by manufacturers from a design point of view.
CitationMiranda-Fuentes, Antonio, Marucco, Paolo, González, E., Gil, E., Grella, M., Balsari, P. Developing strategies to reduce spray drift in pneumatic spraying in vineyards: Assessment of the parameters affecting droplet size in pneumatic spraying. "Science of the total environment", 27 Octubre 2017, vol. 617, núm. 596-597.
URIhttp://hdl.handle.net/2117/113616
DOI10.1016/j.scitotenv.2017.10.242
ISSN0048-9697
Publisher version10.1016/j.scitotenv.2017.10.242
Collections
Share: