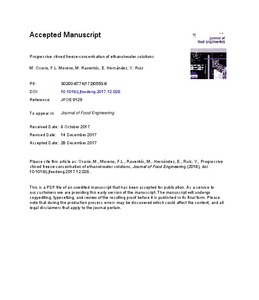 Ruiz Pardo, Ruth Yolanda
Document typeArticle
PublisherElsevier
Rights accessOpen Access
Abstract
© 2017 Progressive freeze-concentration is a technology to separate water from solutions by freezing. In the present investigation, ethanol-water solutions were freeze-concentrated by the progressive stirred technique. The freezing stage was carried out in a stirring vessel. Solute recovery by the fractionated thawing of ice was also studied. The effects of stirring speed (500, 1000, and 2000 rpm), initial concentration of the solution (3%, 5%, and 8% ethanol), and temperature of the thawing stage (0, 10, and 20 °C) on the solute yield and average distribution coefficient were determined using response surface analysis. The ethanol concentration was found to have increased by 1.3 and 2.1 times at the end of the freeze concentration process. It was found that the initial concentration had a significant effect on the distribution coefficient. In addition, the average yield was increased by 28% by fractionated thawing. Subsequently, a non-dimensional analysis of the distribution coefficient was developed to yield a model to predict the distribution coefficient as a function of the Reynolds number, the relationship between the average ice growth rate and the stirring speed, the agitator diameter, and the liquid fraction. This technique proved to be valid with respect to the concentration of ethanol-water solutions, with better yields being obtained at low initial concentrations. This model is the first of its kind to describe the ethanol-water interaction in agitated freeze-concentration systems.
CitationOsorio, M., Moreno, F., Raventos, M., Hernandez, E., Ruiz Pardo, R. Y. Progressive stirred freeze-concentration of ethanol-water solutions. "Journal of food engineering", 2 Gener 2018, vol. 224, p. 71-79.
URIhttp://hdl.handle.net/2117/113611
DOI10.1016/j.jfoodeng.2017.12.026
ISSN0260-8774
Publisher versionhttp://www.sciencedirect.com/science/article/pii/S0260877417305538?via%3Dihub
Collections
Share: