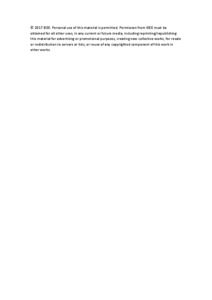 Fernández Romero, Lluís
Eichmann, Jens
Marco, Santiago
Document typeConference lecture
Rights accessOpen Access
Abstract
Conventional fire alarms are based on smoke detection. Nevertheless, in some fire scenarios volatiles are released before smoke. Fire detectors based only on chemical sensors have already been proposed as they may provide faster response, but they are still prone to false alarms in the presence of nuisances. These systems rely heavily on pattern recognition techniques to discriminate fires from nuisances. In this context, it is important to test the systems according to international standards for fires and testing the system against a diversity of nuisances.In this work, we investigate the behavior of a gas sensor array coupled to sensor fusion algorithms forfire detection when exposed to standardized fires and several nuisances. Results confirmed the ability to detect fires (97% Sensitivity), although the system still produces a significant rate of false alarms (35%) for nuisances not presented in the training set.
CitationSolórzano, A., Fonollosa, J., Fernández, L., Eichmann, J., Marco, S. Fire detection using a gas sensor array with sensor fusion algorithms. A: International Symposium on Olfaction and Electronic Nose. " ISOEN 2017 : ISOCS/IEEE International Symposium on Olfaction And Electronic Nose : Montreal, Canada, May 28-31, 2017 : 2017 proceedings papers". Montreal: 2017, p. 1-3.
URIhttp://hdl.handle.net/2117/113560
DOI10.1109/ISOEN.2017.7968889
Publisher versionhttp://ieeexplore.ieee.org/abstract/document/7968889/
Collections
Share: