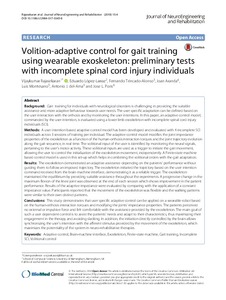 Montesano Del Campo, Luis
Ama, Antonio J. del
Pons Rovira, Jose Luis
Document typeArticle
Rights accessOpen Access
Abstract
Background Gait training for individuals with neurological disorders is challenging in providing the suitable assistance and more adaptive behaviour towards user needs. The user specific adaptation can be defined based on the user interaction with the orthosis and by monitoring the user intentions. In this paper, an adaptive control model, commanded by the user intention, is evaluated using a lower limb exoskeleton with incomplete spinal cord injury individuals (SCI). Methods A user intention based adaptive control model has been developed and evaluated with 4 incomplete SCI individuals across 3 sessions of training per individual. The adaptive control model modifies the joint impedance properties of the exoskeleton as a function of the human-orthosis interaction torques and the joint trajectory evolution along the gait sequence, in real time. The volitional input of the user is identified by monitoring the neural signals, pertaining to the user’s motor activity. These volitional inputs are used as a trigger to initiate the gait movement, allowing the user to control the initialization of the exoskeleton movement, independently. A Finite-state machine based control model is used in this set-up which helps in combining the volitional orders with the gait adaptation. Results The exoskeleton demonstrated an adaptive assistance depending on the patients’ performance without guiding them to follow an imposed trajectory. The exoskeleton initiated the trajectory based on the user intention command received from the brain machine interface, demonstrating it as a reliable trigger. The exoskeleton maintained the equilibrium by providing suitable assistance throughout the experiments. A progressive change in the maximum flexion of the knee joint was observed at the end of each session which shows improvement in the patient performance. Results of the adaptive impedance were evaluated by comparing with the application of a constant impedance value. Participants reported that the movement of the exoskeleton was flexible and the walking patterns were similar to their own distinct patterns. Conclusions This study demonstrates that user specific adaptive control can be applied on a wearable robot based on the human-orthosis interaction torques and modifying the joints’ impedance properties. The patients perceived no external or impulsive force and felt comfortable with the assistance provided by the exoskeleton. The main goal of such a user dependent control is to assist the patients’ needs and adapt to their characteristics, thus maximizing their engagement in the therapy and avoiding slacking. In addition, the initiation directly controlled by the brain allows synchronizing the user’s intention with the afferent stimulus provided by the movement of the exoskeleton, which maximizes the potentiality of the system in neuro-rehabilitative therapies.
CitationRajasekaran, V., López, E., Trincado, F., Aranda, J., Montesano, L., Ama, A., Pons, J.L. Volition-adaptive control for gait training using wearable exoskeleton: preliminary tests with incomplete spinal cord injury individuals. "Journal of neuroengineering and rehabilitation", 3 Gener 2018, vol. 15, núm. 4, p. 1-15.
URIhttp://hdl.handle.net/2117/113526
DOI10.1186/s12984-017-0345-8
ISSN1743-0003
Publisher versionhttps://jneuroengrehab.biomedcentral.com/articles/10.1186/s12984-017-0345-8
Collections
Share: