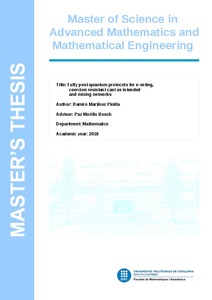 Document typeMaster thesis
Rights accessOpen Access
Abstract
In an electronic election several cryptographic proofs are implemented to guarantee that all the process has been fair. Many cryptographic primitives are based on the hardness of the discrete logarithm, factorization and other related problems. However, these problems are efficiently computable with a quantum computer, and new proofs are needed based on different assumptions not broken by quantum computers. Lattice based cryptography seems one of the most promising post-quantum alternatives. In this thesis we present a coercion resistant cast as intended proof and a proof of a shuffle, both completely based on lattice problems as Inhomogeneous Short Integer Solution (ISIS) and Ring Learning With Errors (RLWE). With the first we prove to the voter that his vote correctly encodes his voting option, without allowing him to prove to a third party that he has chosen a specific option, to avoid the possibility of vote selling. Shuffles are permutations and re-encryptions of casted votes performed by mixing network nodes (mix- net nodes), so that the output can not be related with the input and nobody can link a decrypted vote with the voter who casted it. Given that the goal is to make the output not linkable to the input it is essential to provide a proof of it being a correct shuffle that has preserved the integrity of the votes, without deleting, adding of modifying any of them. To prove both things we have constructed non interactive zero-knowledge proofs, from which anyone can be convinced that a statement is true (with overwhelming probability over a security parameter) with- out revealing any information about the elements that witness it being true.
SubjectsAlgorithms, Algorismes
DegreeMÀSTER UNIVERSITARI EN MATEMÀTICA AVANÇADA I ENGINYERIA MATEMÀTICA (Pla 2010)
URIhttp://hdl.handle.net/2117/113449
Collections
Share: