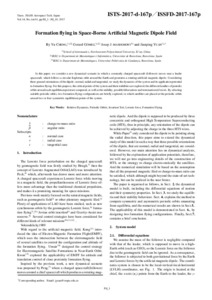 Yuan, Jianping
Document typeConference lecture
Rights accessOpen Access
Abstract
In this paper, we consider a new dynamical scenario in which a constantly charged spacecraft (follower) moves near a leader spacecraft, which follows a circular Keplerian orbit around the Earth and generates a rotating artificial magnetic dipole. Considering three general orientations of the dipole: normal, radial and tangential, we study the dynamics of the system and its application potential in formation flying. For this purpose, the critical points of the system and their stabilities are explored, the different families of periodic orbits around each equilibrium point are computed, as well as the stability, possible bifurcations and terminations(if exist). By selecting suitable periodic orbits, two formation flying configurations are briefly explored, in which satellites are placed at the periodic orbits around two or four symmetric equilibrium points of the system
CitationCheng, Y., Gomez Muntané, Gerard, Masdemont, J.J., Yuan, J. Formation flying in space borne artificial magnetic dipole field. A: International Symposium on Space Flight Dynamics. "ISSFD 2017- International Symposium on Space Flight Dynamics". Matsuyama: 2017, p. 1-10.
URIhttp://hdl.handle.net/2117/113433
Publisher versionhttp://issfd2017.org/paper/ISTS-2017-d-167p__ISSFD-2017-167p.pdf
Collections
Share: