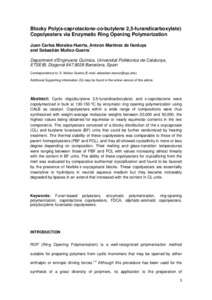 Cyclic oligo(butylene 2,5-furandicarboxylate) and e-caprolactone were copolymerized in bulk at 130-150 ºC by enzymatic ring opening polymerization using CALB as catalyst. Copolyesters within a wide range of compositions were thus synthesized with weight-average molecular weights between 20,000 and 50,000, the highest values being obtained for equimolar or nearly equimolar contents in the two components. The copolyesters consisted of a blocky distribution of the e-oxycaproate (CL) and butylene furanoate (BF) units that could be further randomized by heating treatment. The thermal stability of these copolyesters was comparable to those of the parent homopolyesters (PBF and PCL), and they all showed crystallinity in more or less degree depending on composition. Their melting and glass-transition temperatures were ranging between those of PBF and PCL with values increasing almost linearly with the content in BF units. The ability of these copolyesters for crystallizing from the melt was evaluated by comparative isothermal crystallization and found to be favored by the presence of flexible e-oxycaproate blocks. These copolyesters are essentially insensitive to hydrolysis in neutral aqueous medium but they became noticeably
CitationMorales, J., Martinez de Ilarduya, A., Muñoz, S. Blocky poly(epsilon-caprolactone-co-butylene 2,5-furandicarboxylate) copolyesters via enzymatic ring opening polymerization. "Journal of polymer science. Part A, polymer chemistry", 1 Febrer 2018, vol. 56, núm. 3, p. 290-299.
URIhttp://hdl.handle.net/2117/113421
DOI10.1002/pola.28895
ISSN0887-624X
Publisher versionhttp://onlinelibrary.wiley.com/doi/10.1002/pola.28895/full