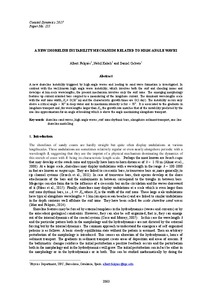 Document typeConference report
Rights accessOpen Access
Abstract
A new shoreline instability triggered by high-angle waves and leading to sand wave formation is investigated. In contrast with the well-known high angle wave instability, which involves both the surf and shoaling zones and develops at km-scale wavelengths, the present mechanism involves only the surf zone. The emerging morphology features up-current oriented bars coupled to a meandering of the longshore current. The dominant wavelengths scale with the surf zone width, Xb= O(102 m) and the characteristic growth times are O(1 day). The instability occurs only above a critical angle ¿30° in deep water and its maximum intensity is for ¿70°. It is associated to the gradients in longshore transport and, for wavelengths larger than Xb, the growth rate matches that of the instability predicted by the one-line approximation for an angle at breaking which is above the angle maximizing alongshore transport.
CitationFalques, A., Kakeh, N., Calvete, D. A new shoreline instability mechanism related to high-angle waves. A: International Conference on Coastal Dynamics. "Proceedings of Coastal Dynamics 2017". Helsingør: 2017, p. 1863-1873.
URIhttp://hdl.handle.net/2117/113418
Publisher versionhttp://coastaldynamics2017.dk/onewebmedia/155_falques_albert.pdf
Collections
Share: