Turbulent convection by thermoelectricity in a cooling-heating didactive device 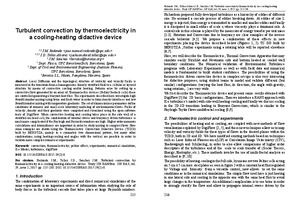 Local Diffusion and the topological structure of vorticity and velocity fields is measured in the transition from a homogeneous linearly stratified fluid to a cellular or layered structure by means of convective cooling and/or heating. Patterns arise by setting up a convective flow generated by an array of Thermoelectric devices (Peltier/Seebeck cells) these are controlled generating a buoyant heat flux. The experiments described here investigate high Prandtl number mixing using brine and fresh water in order to form density interfaces and low Prandtl number mixing with temperature gradients. The set of dimensionless parameters define conditions of numeric and small scale laboratory modeling of environmental flows. Fields of velocity, density and their gradients were computed and visualized using the open software tools of DigiFlow. When convective heating and cooling takes place in the side wall of a stratified enclosed cell, the combination of internal waves and buoyancy driven turbulence is much more complicated if the Rayleigh and Reynolds numbers are high. Higher order moments calculations and intermittency are important in order to study mixing in complex flows Here some examples are shown using the Thermoelectric Convection Didactive Device (TCDD) built by BEROTZA, mainly in a symmetric two dimensional pattern, but many other combinations, using heating-cooling and angles with the vertical are possible in order to validate more complex numerical experiments.
CitationRedondo, J. M., Tellez, J-D, Sanchez, J. Turbulent convection by thermoelectricity in a cooling-heating didactive device. "Proceedings of the Institute for System Programming of the RAS", Abril 2017, vol. 29, núm. 2, p. 215-230.
URIhttp://hdl.handle.net/2117/113403
DOI10.15514/ISPRAS-2017-29(2)-8
ISSN2079-8156
Publisher versionhttp://www.mathnet.ru/php/archive.phtml?wshow=paper&jrnid=tisp&paperid=216&option_lang=eng