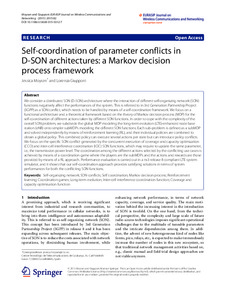 Giupponi, Lorenza
Document typeArticle
Rights accessOpen Access
Abstract
We consider a distributed SON (D-SON) architecture where the interaction of different self-organizing network (SON) functions negatively affect the performances of the system. This is referred to in 3rd Generation Partnership Project (3GPP) as a SON conflict, which needs to be handled by means of a self-coordination framework. We focus on a functional architecture and a theoretical framework based on the theory of Markov decision process (MDP) for the self-coordination of different actions taken by different SON functions. In order to cope with the complexity of the overall SON problem, we subdivide the global MDP modeling the long-term evolution (LTE)-enhanced node base station (eNB) onto simpler subMDPs modeling the different SON functions. Each sub-problem is defined as a subMDP and solved independently by means of reinforcement learning (RL), and their individual policies are combined to obtain a global policy. This combined policy can execute several actions per state but can introduce policy conflicts. We focus on the specific SON conflict generated by the concurrent execution of coverage and capacity optimization (CCO) and inter-cell interference coordination (ICIC) SON functions, which may require to update the same parameter, i.e., the transmission power level. The coordination among the different actions selected by the conflicting use cases is achieved by means of a coordination game where the players are the subMDPs and the actions and rewards are those provided by means of a RL approach. Performance evaluation is carried out in a ns3 release 8 compliant LTE system simulator, and it shows that our self-coordination approach provides satisfying solutions in terms of system performances for both the conflicting SON functions.
CitationMoysen, J., Giupponi, L. Self-coordination of parameter conflicts in D-SON architectures: a Markov decision process framework. "EURASIP Journal on Wireless Communications and Networking", 1 Desembre 2015, vol. 2015, núm. 82, p. 1-15.
URIhttp://hdl.handle.net/2117/113376
DOI10.1186/s13638-015-0312-7
Publisher versionSpringer International Publishing
Collections
Share: