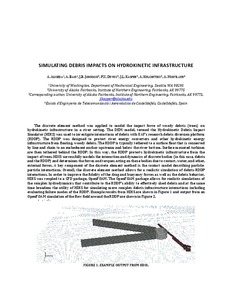 Document typeConference lecture
Rights accessOpen Access
Abstract
The discrete element method was applied to model the impact force of woody debris (trees) on hydrokinetic infrastructure in a river setting. The DEM model, termed the Hydrokinetic Debris Impact Simulator (HDIS) was used to investigate interactions of debris with UAF’s research debris diversion platform (RDDP). The RDDP was designed to protect river energy converters and other hydrokinetic energy infrastructure from floating, woody debris. The RDDP is typically tethered to a surface float that is connected by line and chain to an embedment anchor upstream and below the river bottom. Surface mounted turbines are then tethered behind the RDDP. In this way, the RDDP protects hydrokinetic infrastructure from the impact of trees. HDIS successfully models the interaction and dynamics of discrete bodies (in this case, debris and the RDDP) and determines the forces and torques acting on these bodies due to contact, water, and other, external forces. A key component of the discrete element method is the contact model describing particle-particle interactions. Overall, the discrete element method allows for a realistic simulation of debris-RDDP interactions. In order to improve the fidelity of the drag and buoyancy forces as well as the debris behavior, HDIS was coupled to a CFD package, OpenFOAM. The OpenFOAM package allows for realistic simulations of the complex hydrodynamics that contribute to the RDDP’s ability to effectively shed debris and at the same time broadens the utility of HDIS for simulating more complex debris-infrastructure interactions including evaluating failure modes of the RDDP. Example results from HDIS are shown in Figure 1 and output from an OpenFOAM simulation of the flow field around the RDDP are shown in Figure 2.
CitationAliseda, A., Bagi, A., Johnson, J., Duvoy, P., Kasper, J., Kulchitsky, A., Montlaur, A. Simulating debris impacts on hydrokinetic infrastructure. A: Marine Energy Technology Symposium. "Waterpower Week in Washington proceedings". Washington DC: 2017, p. 1-2.
URIhttp://hdl.handle.net/2117/113340
Publisher versionhttp://events.pennwell.com/www2017/Public/SessionDetails.aspx?FromPage=Sessions.aspx&SessionID=19280#
Collections
Share: