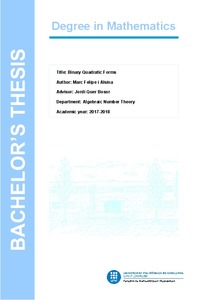 Document typeBachelor thesis
Rights accessOpen Access
Abstract
In this degree thesis, we present some of the theory of integer binary quadratic forms, namely the classification by discriminant, proper equivalence relation, the composition laws and their connection to the ideal class groups. We will also see how quadratic forms are intrinsically connected to some other areas of mathematics, such as the continued fraction of quadratic numbers, which encodes the transformations between neighbouring half-reduced forms in a cycle, or such as the group of units in a quadratic field, which relates to the study of automorphisms of primitive forms, which in turn represent the solutions of Pell's equation $x^2-Dy^2=\pm4$.
SubjectsNumber theory, Nombres, Teoria dels
DegreeGRAU EN MATEMÀTIQUES (Pla 2009)
URIhttp://hdl.handle.net/2117/113333
Collections
Share: