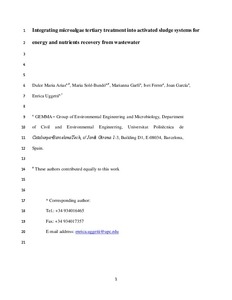 Document typeArticle
Rights accessOpen Access
All rights reserved. This work is protected by the corresponding intellectual and industrial property rights. Without prejudice to any existing legal exemptions, reproduction, distribution, public communication or transformation of this work are prohibited without permission of the copyright holder
Abstract
In this study, microalgae digestate and secondary effluent were used to grow microalgae in a tertiary wastewater treatment, and then, the biomass was co-digested for biogas generation. A 30 L closed-photobioreactor was used for microalgae cultivation. The biomass, mainly composed by Scenedesmus sp., reached and maintained a concentration of 1.1 gTSS/L during 30 days. A complete removal of N-NH4 + and P-PO4 3- and high nitrates and organic matter removals were achieved (58% N-NO3 - and 70% COD) with 8 d of HRT. The potential biogas production of the cultivated microalgae was determined in batch tests. To improve their biodegradability, a novel method combining their co-digestion with activated sludge after a simultaneous autohydrolysis co-pretreatment was evaluated. After the co-pretreatment, the methane yield increased by 130%. Thus, integrating microalgae tertiary treatment into activated sludge systems is a promising and feasible solution to recover energy and nutrients from waste, improving wastewater treatment plants sustainability.
CitationArias , D.M., Sole, M., Marianna Garfi', Ferrer, I., Garcia, J., Uggetti, E. Integrating microalgae tertiary treatment into activated sludge systems for energy and nutrients recovery from wastewater. "Bioresource technology", 1 Gener 2018, vol. 247, p. 513-519.
URIhttp://hdl.handle.net/2117/113247
DOI10.1016/j.biortech.2017.09.123
ISSN0960-8524
Publisher versionhttp://www.sciencedirect.com/science/article/pii/S0960852417316887?via%3Dihub
Other identifiershttps://www.researchgate.net/publication/319958561_Integrating_microalgae_tertiary_treatment_into_activated_sludge_systems_for_energy_and_nutrients_recovery_from_wastewater
Collections
Share: