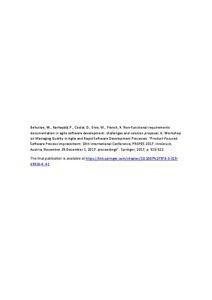 Document typeConference report
PublisherSpringer
Rights accessOpen Access
European Commission's projectQ-RAPIDS - Quality-Aware Rapid Software Development (EC-H2020-732253)
Abstract
Non-functional requirements (NFRs) are determinant for the success of software projects. However, they are characterized as hard to define, and in agile software development (ASD), are often given less priority and usually not documented. In this paper, we present the findings of the documentation practices and challenges of NFRs in companies utilizing ASD and propose guidelines for enhancing NFRs documentation in ASD. We interviewed practitioners from four companies and identified that epics, features, user stories, acceptance criteria, Definition of Done (DoD), product and sprint backlogs are used for documenting NFRs. Wikis, word documents, mockups and spreadsheets are also used for doc-umenting NFRs. In smaller companies, NFRs are communicated through white board and flip chart discussions and developers’ tacit knowledge is prioritized over documentation. However, loss of traceability of NFRs, the difficulty in com-prehending NFRs by new developers joining the team and limitations of docu-mentation practices for NFRs are challenges in ASD. In this regard, we propose guidelines for documenting NFRs in ASD. The proposed guidelines consider the diversity of the NFRs to document and suggest different representation artefacts depending on the NFRs scope and level of detail. The representation artefacts suggested are among those currently used in ASD in order not to introduce new specific ones that might hamper actual adoption by practitioners.
CitationBehutiye, W., Karhapää, P., Costal, D., Oivo, M., Franch, X. Non-functional requirements documentation in agile software development: challenges and solution proposal. A: Workshop on Managing Quality in Agile and Rapid Software Development Processes. "Product-Focused Software Process Improvement: 18th International Conference, PROFES 2017: Innsbruck, Austria, November 29-December 1, 2017: proceedings". Springer, 2017, p. 515-522.
URIhttp://hdl.handle.net/2117/113227
DOI10.1007/978-3-319-69926-4_41
ISBN978-3-319-69926-4
Publisher versionhttps://link.springer.com/chapter/10.1007%2F978-3-319-69926-4_41
Collections
Share: