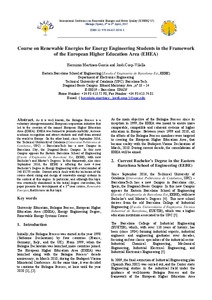 As it is well known, the Bologna Process is a voluntary intergovernmental European cooperation initiative that led to the creation of the named European Higher Education Area (EHEA). EHEA was formed to promote mobility, increase academic recognition and attract students and staff from around the world to Europe. On the other hand, since September 2016, the Technical University of Catalonia (Universitat Politècnica de Catalunya, UPC) – BarcelonaTech has a new Campus in Barcelona City, the Diagonal-Besòs Campus. In this new Campus appears the Eastern Barcelona School of Engineering (Escola d’Enginyeria de Barcelona Est, EEBE), with new Bachelor’s and Master’s Degrees. In this framework, also since September 2016, the EEBE is offering the new 4-year Bachelor’s Degree in Energy Engineering with a total number of 240 ECTS credits. Current article deals with the inclusion of the course about sizing and design of renewable energy systems in the context of this degree. In particular, and although this topic was eventually abandoned in the initial degree curriculum, the paper presents the development of a 3rd-year course, Renewable Energies, that focuses on this topic.
CitationMartinez, H., Cosp, J. Course on renewable energies for Energy Engineering students in the framework of the European Higher Education Area (EHEA). A: International Conference on Renewable Energies and Power Quality. "Proceedings of the ICREPQ’17: International Conference on Renewable Energies and Power Quality 2017: Málaga (Spain): 4th-6th April, 2017". Malaga: Universidad de Málaga, 2017, p. 1-5.
URIhttp://hdl.handle.net/2117/113153
ISBN978-84-617-8076-1