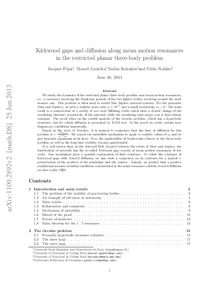 Kaloshin, Vadim
Fejoz, J.
Roldan, Pablo
Document typeArticle
Rights accessOpen Access
Abstract
We study the dynamics of the restricted planar three-body problem near mean motion resonances, i.e. a resonance involving the Keplerian periods of the two lighter bodies revolving around the most massive one. This problem is often used to model Sun--Jupiter--asteroid systems. For the primaries (Sun and Jupiter), we pick a realistic mass ratio µ=10-3 and a small eccentricity e0>0. The main result is a construction of a variety of non local diffusing orbits which show a drastic change of the osculating (instant) eccentricity of the asteroid, while the osculating semi major axis is kept almost constant. The proof relies on the careful analysis of the circular problem, which has a hyperbolic structure, but for which diffusion is prevented by KAM tori. We verify certain non-degeneracy conditions numerically. Based on the work of Treschev, it is natural to conjecture that diffusion time for this problem is ~-ln(µe0)µ3/2e0. We expect our instability mechanism to apply to realistic values of e0 and we give heuristic arguments in its favor. If so, the applicability of Nekhoroshev theory to the three-body problem as well as the long time stability become questionable. It is well known that, in the Asteroid Belt, located between the orbits of Mars and Jupiter, the distribution of asteroids has the so-called Kirkwood gaps exactly at mean motion resonances of low order. Our mechanism gives a possible explanation of their existence. To relate the existence of Kirkwood gaps with Arnold diffusion, we state a conjecture on its existence for a typical $\eps$-perturbation of the product of a pendulum and a rotator. Namely, we predict that a positive conditional measure of initial conditions concentrated in the main resonance exhibits Arnold diffusion on time scales $\frac{- \ln \eps}{\eps^{2}}$
CitationGuardia, M., Kaloshin, V., Fejoz, J., Roldan, P. Kirkwood gaps and diffusion along mean motion resonances in the restricted planar three-body problem. "Journal of the European Mathematical Society", 2016, vol. 18, núm. 10, p. 2315-2403.
URIhttp://hdl.handle.net/2117/113150
DOI10.4171/JEMS/642
ISSN1435-9855
Publisher versionhttps://www.ems-ph.org/journals/subscription.php?jrn=jems
Collections
Share: