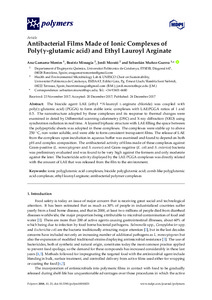 © 2017 by the author. The biocide agent LAE (ethyl aN-lauroyl l-arginate chloride) was coupled with poly(y-glutamic acid) (PGGA) to form stable ionic complexes with LAE:PGGA ratios of 1 and 0.5. The nanostructure adopted by these complexes and its response to thermal changes were examined in detail by Differential scanning calorimetry (DSC) and X-ray diffraction (XRD) using synchrotron radiation in real time. A layered biphasic structure with LAE filling the space between the polypeptidic sheets was adopted in these complexes. The complexes were stable up to above 250 °C, non-water soluble, and were able to form consistent transparent films. The release of LAE from the complexes upon incubation in aqueous buffer was examined and found to depend on both pH and complex composition. The antibacterial activity of films made of these complexes against Gram-positive (L. monocytogenes and S. aureus) and Gram-negative (E. coli and S. enterica) bacteria was preliminary evaluated and was found to be very high against the formers and only moderate against the later. The bactericide activity displayed by the LAE·PGGA complexes was directly related with the amount of LAE that was released from the film to the environment
CitationGamarra, A., Missagia, B., Morato, J., Muñoz, S. Antibacterial films made of ionic complexes of poly(y-glutamic acid) and ethyl lauroyl arginate. "Polymers", 24 Desembre 2017, vol. 10, núm. 1., p.1-14
URIhttp://hdl.handle.net/2117/113128
DOI10.3390/polym10010021
ISSN2073-4360
Publisher versionhttp://www.mdpi.com/2073-4360/10/1/21