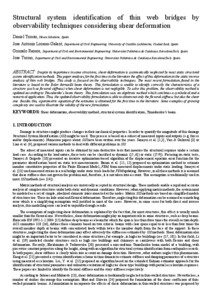 Despite its importance in some structures, shear deformation is systematically neglected by most static structural system identification methods. This paper analyzes for the first time in the literature the effect of this deformation in the static inverse analysis of thin web bridges. This study is focused on the observability techniques. The most recent formulation found in the literature is based onthe Euler-Bernoulli beam theory. This formulation is unable to identify correctly the characteristics of a structure (such as flexural stiffness) when shear deformation is not negligible. To solve this problem, the observability method is updated according to Timoshenko's beam theory. This formulation uses an algebraic method which combines a symbolical and a numerical application. Thus, the updated observability formulation is able to obtain not only the flexural stiffness but also the shear one. Besides this, a parametric equation of the estimates is obtained for the first time in the literature. Some examples of growing complexity are used to illustrate the validity of the the proposed formulation formulation.
CitationTomas, D., Lozano-Galant, J.A., Ramos, G., Turmo, J. Structural system identification of thin web bridges by observability techniques considering shear deformation. "Thin-walled structures", Febrer 2018, vol. 123, p. 282-293.
URIhttp://hdl.handle.net/2117/113104
DOI10.1016/j.tws.2017.11.017
ISSN0263-8231
Publisher versionhttps://www.sciencedirect.com/science/article/pii/S0263823117303014