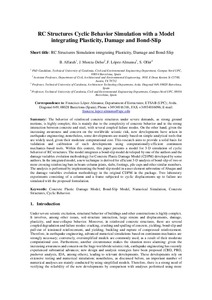 Copyright © 2017 John Wiley & Sons, Ltd. The behavior of reinforced concrete structures under severe demands, as strong ground motions, is highly complex; this is mainly due to the complexity of concrete behavior and to the strong interaction between concrete and steel, with several coupled failure modes. On the other hand, given the increasing awareness and concern on the worldwide seismic risk, new developments have arisen in earthquake engineering; nonetheless, some developments are mainly based on simple analytical tools that are widely used, given their moderate computational cost. This research aims to provide a solid basis for validation and calibration of such developments by using computationally efficient continuum mechanics-based tools. Within this context, this paper presents a model for 3D simulation of cyclic behavior of RC structures. The model integrates a bond-slip model developed by one of the authors and the damage variable evolution methodology for concrete damage plastic model developed by some authors. In the integrated model, a new technique is derived for efficient 3D analysis of bond-slip of 2 or more crossing reinforcing bars in beam-column joints, slabs, footings, pile caps, and other similar members. The analysis is performed by implementing the bond-slip model in a user element subroutine of Abaqus and the damage variable evolution methodology in the original concrete damage plastic model in the package. Two laboratory experiments consisting of a column and a frame subjected to cyclic displacements up to failure are simulated with the proposed formulation.
CitationAlfarah, B., Murcia-Delso, J., Lopez Almansa, F., Oller, S. RC structures cyclic behavior simulation with a model integrating plasticity, damage, and bond-slip. "Earthquake engineering and structural dynamics", 2018, vol. 47, núm. 2, p. 460-478.
URIhttp://hdl.handle.net/2117/112987
DOI10.1002/eqe.2974
ISSN0098-8847
Publisher versionhttp://onlinelibrary.wiley.com/doi/10.1002/eqe.2974/abstract;jsessionid=C531FA18283247A123A558C1F2A306EE.f02t04