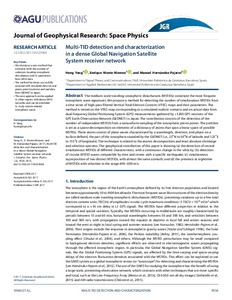 The medium-scale traveling ionospheric disturbances (MSTIDs) constitute the most frequent ionospheric wave signatures. We propose a method for detecting the number of simultaneous MSTIDs from a time series of high-pass-filtered Vertical Total Electron Content (VTEC) maps and their parameters. The method is tested on the VTEC map corresponding to a simulated realistic scenario and on actual data from dual-frequency Global Positioning System (GPS) measurements gathered by +1200 GPS receivers of the GPS Earth Observation Network (GEONET) in Japan. The contribution consists of the detection of the number of independent MSTIDs from a nonuniform sampling of the ionospheric pierce points. The problem is set as a sparse decomposition on elements of a dictionary of atoms that span a linear space of possible MSTIDs. These atoms consist of plane waves characterized by a wavelength, direction, and phase on a surface defined, the part of the ionosphere sounded by the GEONET (i.e., 25°N to 50°N of latitude and 125°E to 155°E of longitude). The technique is related to the atomic decomposition and least absolute shrinkage and selection operator. The geophysical contribution of this paper is showing (a) the detection of several simultaneous MSTIDs of different characteristics, with a continuous change in the velocity; (b) detection of circular MSTID waves compatible by time and center with a specific earthquake; (c) simultaneous superposition of two distinct MSTIDs, with almost the same azimuth; and (d) the presence at nighttime of MSTIDs with velocities in the range 400–600 m/s.
CitationYang, H., Monte, E., Hernandez, M. Multi-TID detection and characterization in a dense Global Navigation Satellite System receiver network. "Journal of geophysical research: space physics", 1 Setembre 2017, vol. 122, núm. 9, p. 9554-9575.
URIhttp://hdl.handle.net/2117/112900
DOI10.1002/2017JA023988
ISSN2169-9380
Publisher versionhttp://onlinelibrary.wiley.com/doi/10.1002/2017JA023988/abstract?systemMessage=Wiley+Online+Library+usage+report+download+page+will+be+unavailable+on+Friday+24th+November+2017+at+21%3A00+EST+%2F+02.00+GMT+%2F+10%3A00+SGT+%28Saturday+25th+Nov+for+SGT+