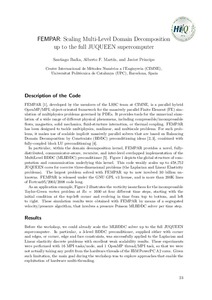 Document typeExternal research report
Rights accessOpen Access
Abstract
In conjunction with this year's JUQUEEN Porting and Tuning Workshop, which is part of the PRACE Advanced Training Centres curriculum, JSC continued its series of BlueGene Extreme Scaling Workshops. Seven application teams were invited to stay for two days and work on the scalability of their codes, with dedicated access to the entire JUQUEEN system for a period of 30 hours. Most of the teams' codes had thematic overlap with JSC Simulation Laboratories or were part of an ongoing collaboration with one of the SimLabs. The code teams came from the fields of climate science (ICON from DKRZ, and MPAS-A from KIT and NCAR), engineering (FEMPAR from UPC, and ex_nl/FE^2 from Uni Cologne and TU Freiberg), fluid dynamics (psOpen and SHOCK both from RWTH Aachen), and neuroscience (CoreNeuron from the EPFL Blue Brain Project) and were supported by JSC SimLabs and Cross-sectional teams, with IBM and JUQUEEN technical support. Within the first 24 hours of dedicated access to the entire 28 racks, all seven teams had adapted their codes and datasets to exploit the massive parallelism and restricted node memory for successful executions using all 458,752 cores. Most of them also demonstrated excellent strong or weak scalability, qualifying all but one for the High-Q Club. A total of 370 'large' jobs were executed using 12 of the 15 million core-hours of compute time allocated for the workshop. Detailed results for each code, provided by the application teams themselves, is introduced by analysis comparing them to the other 16 High-Q Club codes.
Description
Type of production: technical report (JUQUEEN Extreme Scaling Workshop, Juelich Supercomputing Center, Germany, 2015). Format: contributed chapter.
CitationMartín, A. F., Badia, S., Principe, J. "FEMPAR: Scaling Multi-Level Domain Decomposition up to the full JUQUEEN supercomputer". 2015.
Is part ofFZJ-JSC-IB-2015-01
URIhttp://hdl.handle.net/2117/112867
URL other repositoryhttp://hdl.handle.net/2128/8435
Collections
Share: