Understanding Growth Pharma: a deep dive into the Actavis-Allergan merger 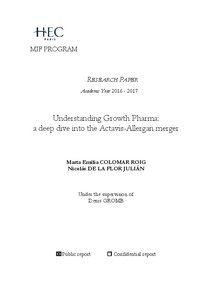 gmail.com
Tutor / directorGromb, Denis
Document typeMaster thesis
Rights accessOpen Access
Abstract
Since the 2000s, the Pharmaceutical industry has been facing strong challenges: a constantly changing and increasingly complex regulatory environment, an erosion of margins caused by governmental pricing pressures and a decrease in Research & Development (R&D) productivity. This complex environment has hurt the industry’s bottom line, forcing incumbents and new players to reconsider their approach to the industry’s propelling engine: R&D. Traditionally, innovation was driven by big pharmaceutical companies allocating an important amount of their sales on R&D spending. By developing new drugs in-house, these companies were managing to keep the control over these new drugs and treatments. These innovations were then protected by patents lasting for a few decades. Once the protection had expired, other players could enter the market by replicating the drug, driving its prices and hence, its profitability down by as much as 80%. In the last decades, the way innovation is being delivered has changed. Rather than big pharmaceutical firms developing new products, small biotechnological start-ups are responsible for most of the new discoveries. Their small size forces these players to specialize and focus all their R&D efforts on specific therapeutic areas. Additionally, these start-ups can attract human capital and talent, but lack financial muscle to exploit their findings. These conditions set the perfect framework for the increase of M&A activity with far more potential targets to buy. Building on this, a new business model has arisen in the industry: Growth Pharma. Among others, its most important characteristic is the way R&D is conducted. Instead of vast investments to develop drugs in-house, Growth Pharma companies tend to buy other biotech & pharma companies to acquire their drug development pipeline. In this way, rather than dealing with the uncertainty of developing new drugs and facing regulatory risks, these companies acquire other players with drugs in late-stage of development. The merger of Actavis and Allergan is considered as of 2015 the foremost example of Growth Pharma. In addition to being the fourth largest deal of all times in the Pharmaceutical industry, its characteristics make it a unique deal. The story started with an unsuccessful hostile takeover by Valeant Pharmaceuticals, a company which embraced Growth Pharma under the leadership of Michael Pearson. Some investors considered Valeant the new Berkshire Hathaway after it partnered in 2014 with Pershing Square, a New York based hedge fund, to do a hostile takeover over Allergan. Actavis’ friendly takeover of Allergan granted the merged company access to the Top 10 companies by Enterprise Value within the pharmaceutical industry. Both companies followed different R&D models: Allergan’s closer to the traditional approach and Actavis opting for the Growth Pharma model. However, a combination of both companies seemed to bring the best of these two worlds. On one side, Allergan’s expertise in developing new drugs and block-buster patents such as BOTOX®. On the other side, Actavis’ best-in-class in pipeline success rate through a spotless record of effectively integrated acquisitions.
SubjectsPharmacology, Farmacologia
DegreeMÀSTER UNIVERSITARI EN ENGINYERIA INDUSTRIAL (Pla 2014)
URIhttp://hdl.handle.net/2117/112860
Collections
Share: