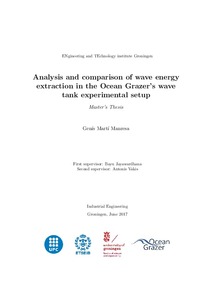 Except where otherwise noted, content on this work is licensed under a Creative Commons license : Attribution-NonCommercial-NoDerivs 3.0 Spain
Abstract
Fossil fuels have been fundamental to the evolution of humanity's technology and way of life for the last two centuries. However, their use has two main disadvantages: (a) the climate change produced by the release of carbon dioxide (CO2) during their combustion; and (b) their limited reserves. In the last decades, society has tried to counter these problems by potentiating the use of renewable energies instead of fossil fuels. The Ocean Grazer (OG) is one of the many proposed projects to develop the renewable energy eld further. Developed by the University of Groningen, the OG platform is expected to extract and store multiple forms of renewable energy, of which wave energy is its primary source. The main innovation provided by the OG is a novel Wave Energy Converter (WEC) technology denominated MP2PTO, which aims to adapt to the di erent wave pro les so the maximum energy content can always be extracted. In the last years, one of the many research lines in the group has been the study of the wave energy extraction process in an experimental setup called the wave tank, which contains a prototype of the multi-piston PTO concept used in the OG-WEC. More precisely, in the last few months, experimental measurements of the velocity of the particles within the tank have been carried out using the Digital Particle Image Velocimetry (DPIV) technique, taking into account di erent scenarios that allow investigating the in uence of the prototype in the process of energy extraction. In this work, the validation of these experimental measurements of the kinetic energy contained in the OG group's wave tank experimental setup is approached by the use of a computational uid dynamics (CFD) simulation software developed by the University of Groningen called ComFLOW. In a rst phase of the validation process, a time domain analysis of the simulation results is done. In this analysis, the non-convergence of the simulation is detected. However, the results of the simulations are compared to the experimental measurements leading to a qualitative coincidence of the evolution of the content of energy along the tank but not quantitative. In a second phase, the non-convergence of the simulation is studied by means of a frequency domain analysis of the wave tank's water surface height. This study allows the detection of a strong mesh-dependant wave re ection in the simulation's wave tank, which is the reason behind the non-convergence of the simulation. Consequently, due to this non-convergence, no validation of the experimental measurements can be fully con rmed even though the behaviour of the kinetic energy along the simulation tank is very similar to the experimental measurements. Finally, further research paths are proposed in the Conclusion Section.
SubjectsHydraulic engineering, Energia hidràulica
DegreeMÀSTER UNIVERSITARI EN ENGINYERIA INDUSTRIAL (Pla 2014)
URIhttp://hdl.handle.net/2117/112859
Collections
Share: