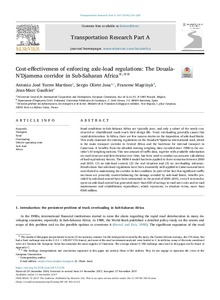 Except where otherwise noted, content on this work is licensed under a Creative Commons license : Attribution-NonCommercial-NoDerivs 3.0 Spain
Abstract
Road conditions in Sub-Saharan Africa are typically poor, and only a subset of the newly constructed or rehabilitated roads reach their design life. Truck overloading generally causes this rapid deterioration. In Africa, there are few success stories on the imposition of axle-load limits. This study examines the existing regulations on the Douala-N'Djamena international road, which is the main transport corridor in Central Africa and the backbone for internal transport in Cameroon. It benefits from the detailed existing weighing data recorded since 1998 in the corridor's 10 weighing stations. This vast amount of traffic data, together with available information on road structure and deterioration over time, has been used to conduct an accurate calculation of load equivalency factors. The HDM 4 model has been applied to three scenarios between 2000 and 2015: (1) no axle-load control, (2) the real situation and (3) no overloading tolerance. Results show that axle-load regulations have been reasonably well applied in Cameroon and have contributed to maintaining the corridor in fair condition. In spite of the fact that significant traffic increases are presently counterbalancing the damage avoided by axle-load limits, benefits provided by axle-load control have been substantial: in the period of 2000–2015, every € invested or spent on axle-load control has generated more than €20 of savings in road user costs and in road maintenance and rehabilitation expenditure, which represents, in absolute terms, more than €500 million.
CitationTorres, A., Oliete, S., Magrinya, F., Gauthier, J. Cost-effectiveness of enforcing axle-load regulations: the Douala-N’Djamena corridor in Sub-Saharan Africa. "Transportation research. Part A, Policy and practice", Gener 2018, vol. 107, p. 216-228.
URIhttp://hdl.handle.net/2117/112843
DOI10.1016/j.tra.2017.11.016
ISSN0965-8564
Publisher versionhttp://www.sciencedirect.com/science/article/pii/S0965856416311946
Collections
Share: