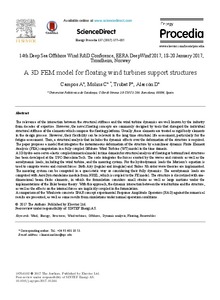 Except where otherwise noted, content on this work is licensed under a Creative Commons license : Attribution-NonCommercial-NoDerivs 3.0 Spain
Abstract
The relevance of the interaction between the structural stiffness and the wind turbine dynamics are well known by the industry from decades of expertise. However, the novel floating concepts are commonly designed by tools that disregard the individual structural stiffness of the elements which compose the floating platform. Usually, these elements are treated as rigid body elements in the design process. However, their flexibility can be relevant in the long time structural life assessment, particularly for the fatigue assessment. Then, a structural analysis that includes the dynamic effects over the deformation of the structure is required. The paper proposes a model that integrates the instantaneous deformation of the structure by a nonlinear dynamic Finite Element Analysis (FEA) computation in a fully coupled Offshore Wind Turbine (WT) model in the time domain. A 3D hydro-aero-servo-elastic coupled numerical model in time domain for structural analysis of floating or bottom fixed structures has been developed at the UPC-BarcelonaTech. The code integrates the forces exerted by the waves and currents as well as the aerodynamic loads, including the wind turbine, and the mooring system. For the hydrodynamic loads the Morison’s equation is used to compute waves and current forces. Both Airy (regular and irregular) and Stokes 5th order wave theories are implemented. The mooring system can be computed in a quasi-static way or considering their fully dynamics. The aerodynamic loads are computed with AeroDyn standalone module from NREL, which is coupled to the FE model. The structure is discretized with one-dimensional beam finite elements, in which the formulation considers small strains as well as large motions under the implementations of the Euler beams theory. With this approach, the dynamic interaction between the wind turbine and the structure, as well as the effects on the internal forces are implicitly coupled in the formulation. A comparison of the Windcrete concrete SPAR concept experimental Response Amplitude Operators (RAO) against the numerical results are presented, as well as some results from simulations under normal operation conditions.
CitationCampos, A., Molins, C., Trubat, P., Alarcon, D. A 3D FEM model for floating wind turbines support structures. "Energy procedia", Octubre 2017, vol. 137, p. 177-185.
URIhttp://hdl.handle.net/2117/112840
DOI10.1016/j.egypro.2017.10.344
ISSN1876-6102
Publisher versionhttps://www.sciencedirect.com/science/article/pii/S1876610217353067
Collections
Share: