Investigation of the perfomance of a large PV system 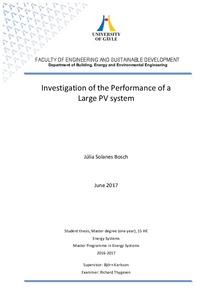 One of the main social challenges that society is facing nowadays is the energy crisis. So, head towards renewable energy resources such as solar, hydraulic, wind, geothermal and biomass, could be the best solution. Solar photovoltaic is one of the most promising sources to produce electricity due to its cleanness, noiselessness and sustainability, and the fact that it is inexhaustible. However, the power output of the PV systems varies notably because of the ambient conditions: temperature and solar radiation. The main aim of this thesis is to study if the PV system installed on the wall of the new football arena Gavlehov in Gävle is providing the amount of power promised before the installation. To achieve reliable results, the first step is to develop and install a monitoring system for recording the real power of the system and the ambient conditions at the same time. After that, an evaluation of the performance of the system during one week will be done, comparing the theoretical power and the real power obtained. The theoretical power will be calculated in two ways: using the data from a pyranometer and on the other hand, from a reference solar cell. This will permit to compare which one matches better with the reality. Different factors such as the temperature, the irradiance and the angle of incidence are studied to know the real influence that they have on the performance of a PV installation. The results obtained show that the measurement system installed is reliable and that the model used to evaluate the system is correct. It can be concluded that using a reference solar cell to calculate the theoretical power of the system is easier to align and it has the same angular behaviour as a PV module than employing a pyranometer. Regarding the installation, all the panels work similarly and the system works at nominal power. So, it provides the amount of power promised before the installation.
SubjectsSolar energy, Energia solar
URIhttp://hdl.handle.net/2117/112826