Parasites in the inner ear of harbour porpoise: Cases from the North and baltic seas 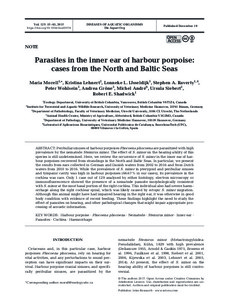 Peribullar sinuses of harbour porpoises Phocoena phocoena are parasitized with high prevalence by the nematode Stenurus minor. The effect of S. minor on the hearing ability of this species is still undetermined. Here, we review the occurrence of S. minor in the inner ear of harbour porpoises recovered from strandings in the North and Baltic Seas. In particular, we present the results from ears collected in German and Danish waters from 2002 to 2016 and from Dutch waters from 2010 to 2016. While the prevalence of S. minor in pterygoid and peribullar sinuses and tympanic cavity was high in harbour porpoises (66.67% in our cases), its prevalence in the cochlea was rare. Only 1 case out of 129 analysed by either histology, electron microscopy or immunofluorescence showed the presence of a nematode parasite morphologically consistent with S. minor at the most basal portion of the right cochlea. This individual also had severe haemorrhage along the right cochlear spiral, which was likely caused by ectopic S. minor migration. Although this animal might have had impaired hearing in the right ear, it was otherwise in good body condition with evidence of recent feeding. These findings highlight the need to study the effect of parasites on hearing, and other pathological changes that might impair appropriate processing of acoustic information.
CitationMorell, M., Lehnert, K., Raverty, S., Wohlsein, P., Gröne, A., Andre, M., Siebert, U., Shadwick, R. Parasites in the inner ear of harbour porpoise: Cases from the North and baltic seas. "Diseases of aquatic organisms", 19 Desembre 2017, vol. 127, núm. 1, p. 57-63.
URIhttp://hdl.handle.net/2117/112824
DOI10.3354/dao03178
ISSN0177-5103
Publisher versionhttp://www.int-res.com/abstracts/dao/v127/n1/p57-63/