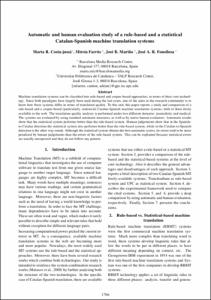 Document typeConference report
Rights accessOpen Access
Abstract
Machine translation systems can be classified into rule-based and corpus-based approaches, in terms of their core technology. Since both paradigms have largely been used during the last years, one of the aims in the research community is to know how these systems differ in terms of translation quality. To this end, this paper reports a study and comparison of a rule-based and a corpus-based (particularly, statistical) Catalan-Spanish machine translation systems, both of them freely available in the web. The translation quality analysis is performed under two different domains: journalistic and medical. The systems are evaluated by using standard automatic measures, as well as by native human evaluators. Automatic results show that the statistical system performs better than the rule-based system. Human judgements show that in the Spanishto- Catalan direction the statistical system also performs better than the rule-based system, while in the Catalan-to-Spanish direction is the other way round. Although the statistical system obtains the best automatic scores, its errors tend to be more penalized by human judgements than the errors of the rule-based system. This can be explained because statistical errors are usually unexpected and they do not follow any pattern.
CitationCosta-Jussà, M. R. [et al.]. Automatic and human evaluation study of a rule-based and a statistical Catalan-Spanish machine translation systems. A: International Conference on Language Resources and Evaluation. "Seventh Conference on International Language Resources and Evaluation". Valletta: 2011, p. 1707-1711.
URIhttp://hdl.handle.net/2117/11279
ISBN2-9517408-6-7
Publisher versionhttp://www.lrec-conf.org/proceedings/lrec2010/pdf/47_Paper.pdf
Collections
Share: