Semiotic process of the office configuration 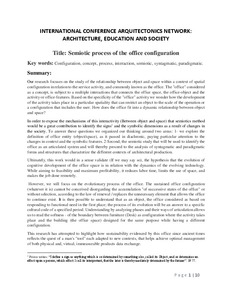 Our research focuses on the study of the relationship between object and space within a context of spatial configuration in relation to the service activity, and commonly known as the office. The "office" considered as a concept, is subject to a multiple interactions that connects the office space, the office-object and the activity or office-features. Based on the specificity of the "office" activity we wonder how the development of the activity takes place in a particular spatiality that can restrict an object to the scale of the operation or a configuration that includes the user. How does the office fit into a dynamic relationship between object and space? In order to expose the mechanisms of this interactivity (Between object and space) that semiotics method would be a great contribution to identify the signs1 and the symbolic dimensions as a result of changes in the society. To answer these questions we organized our thinking around two areas: 1- we explore the definition of office entity (object/space), as it passed in diachronic, paying particular attention to the changes in context and the symbolic features. 2-Second, the semiotic study that will be used to identify the office as an articulated system and will thereby proceed to the analysis of syntagmatic and paradigmatic forms and structures that characterize the different contexts of architectural production. Ultimately, this work would in a sense validate (If we may say so), the hypothesis that the evolution of cognitive development of the office space is in relation with the dynamics of the evolving technology. While aiming to feasibility and maximum profitability, it reduces labor time, limits the use of space, and makes the job done remotely. However, we will focus on the evolutionary process of the office. The sustained office configuration (whatever it is) cannot be conceived disregarding the accumulation "of successive states of the office" or without selection, according to the law of renewal / replaces the unnecessary element that allows the office to continue exist. It is then possible to understand that as an object, the office considered as based on responding to functional need in the first place; the process of its evolution will be an answer to a specific cultural code of a specified period. Understanding by analyzing phases and their ways of articulation allows us to read the softness - of the boundary between furniture (Desk) as configuration where the activity takes place and the building (the office space) designed for the same purpose while having a different configuration. This research has attempted to highlight how sustainability evidenced by this office since ancient times reflects the quest of a man's "tool" each adapted to new contexts, that helps achieve optimal management of both physical and, virtual, immeasurable products data exchange.
CitationNajjar Mansour, O. Semiotic process of the office configuration. A: Arquitectonics. "International Conference Arquitectonics Network: Architecture, Education and Society, Barcelona, 3-5 June 2015: Final papers". Barcelona: GIRAS. Universitat Politècnica de Catalunya, 2015.
URIhttp://hdl.handle.net/2117/112764
ISBN978-84-608-4211-8