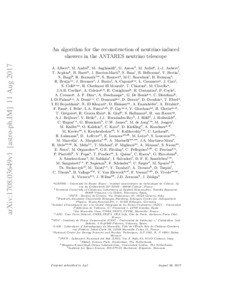 Document typeArticle
Rights accessOpen Access
Abstract
Muons created by nm charged current (CC) interactions in the water surrounding the ANTARES neutrino telescope have been almost exclusively used so far in searches for cosmic neutrino sources. Due to their long range, highly energetic muons inducing Cherenkov radiation in the water are reconstructed with dedicated algorithms that allow for the determination of the parent neutrino direction with a median angular resolution of about 0.4 for an E-2 neutrino spectrum. In this paper, an algorithm optimized for accurate reconstruction of energy and direction of shower events in the ANTARES detector is presented. Hadronic showers of electrically charged particles are produced by the disintegration of the nucleus both in CC and neutral current interactions of neutrinos in water. In addition, electromagnetic showers result from the CC interactions of electron neutrinos while the decay of a tau lepton produced in nt CC interactions will, in most cases, lead to either a hadronic or an electromagnetic shower. A shower can be approximated as a point source of photons. With the presented method, the shower position is reconstructed with a precision of about 1 m; the neutrino direction is reconstructed with a median angular resolution between 2 and 3 in the energy range of 11000 TeV. In this energy interval, the uncertainty on the reconstructed neutrino energy is about 5%10%. The increase in the detector sensitivity due to the use of additional information from shower events in the searches for a cosmic neutrino flux is also presented.
CitationAlbert, A., Andre, M. An algorithm for the reconstruction of neutrino-induced showers in the ANTARES Neutrino telescope. "Astronomical journal", 4 Desembre 2017, vol. 154, núm. 6.
URIhttp://hdl.handle.net/2117/112729
DOI10.3847/1538-3881/aa9709
ISSN0004-6256
Publisher versionhttp://iopscience.iop.org/article/10.3847/1538-3881/aa9709/meta#top
Collections
Share: